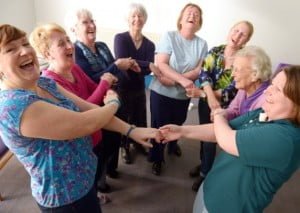 From the Edinburgh Evening News, 21 February 2014. Photo by Phil Wilkinson.

SHE had everything to smile about. A high-flying job, a stable income and good health to boot.

Life was great for Jo Bluett – and she knew it. When things started to go wrong, they did so spectacularly.

The life she had known and loved fell apart rapidly around her, her well-paid job as a business development consultant with Standard Life ended, and her money quickly dried up. Before she knew it, Jo was living a life on benefits, isolated in her own home, struggling and confused by what was happening. Doctors had diagnosed her with the chronic fatigue condition, ME.

“Imagine waking up one morning and everything you used to be able to do has changed,” says Jo, 48, from Tollcross.

“You have no energy, and worse than all that, you no longer recognise yourself.”

She is the first to admit that ten years ago her condition almost destroyed her. She went from living a fast-paced life, full of pressures and demands in the workplace, to staring blankly at her four walls desperate to figure out how – somehow – everything would be alright again.

But as the saying goes, laughter is the best medicine and just when Jo thought she would never laugh again, she decided to take matters into her own hands.

Today, the Edinburgh Laughter Club celebrates its first birthday with founder Jo joking about its achievements in a way she would never have thought possible when, in the depths of her despair, her condition strangled any smiles left inside her.

It all began in 2008 when Jo heard about a laughter workshop in the Capital and having given countless alternative therapies a go – without much luck – she clung to the hope that this venture might be able to help her find her old self.

“I was at my wits’ end until the day I walked into that workshop and saw that happiness and laughing can rescue people,” says Jo.

It was not about telling jokes, or watching classic comedy films, but rather focusing on the mind, casting aside inhibitions and just letting go.

“I saw instant results and firmly believe that if it worked for someone as poorly as I was it can work for anyone,” Jo adds. “I’m living proof.”

It was not long before Jo decided she could make laughing more than just a self-diagnosed treatment but a job.

Building on her 20-year career which involved huge amounts of training workshops and specialist support for fellow employees, she made it her mission to help others through laughter.

Before too long she had trained as a laughter facilitator and a laughter yoga leader with the Laughter Network and the Thursday Laughter Club, held weekly at the Eric Liddell Centre at Holy Corner, was soon born.

One year on, the club has attracted around 80 people from many different backgrounds, some coming back week after week.

“Everyone has their own story and reason for coming,” says Jo.

They include those recovering from breast cancer, or for another, using laughter to improve their symptoms of asthma.

Focussing on the mind, Jo encourages her members to generate laughter from the body.

She brings out their inner child by combining movement and playfulness during laughter yoga in her workshops to encourage genuine side splitting laughter.

Among returning members are many carers who come to relax and de-stress after what, more often than not, proves to be an exhausting week.

The Thursday Laughter Club has close links with Edinburgh’s Ca(i)re Programme – an organisation supporting the well-being of carers across Edinburgh – and over the last year has raised almost £1500 for the cause.

Anyone attending the Laughter Club pays a small weekly fee, but there are hopes to make it free for carers.

Jo is also starting a Wednesday evening laughter club for laughter leaders who have recently completed training with Laughter for Health (www.laughterforhealth.co.uk), where she will be donating all profits to a local charity.

There are also plans for laughter workshops to be brought into the workplace courtesy of Jo, only too aware of how under pressure many busy workers across Edinburgh are.

In these sessions she will use the laughter sessions to break the ice between colleagues and encourage staff to be more open and relaxed.

“I have seen how therapeutic laughter really can rescue people and help them to make positive changes in their lives,” says Jo, who is still diagnosed with ME, but is more than coping with the daily challenges it brings.

“It is constantly inspiring to see big changes in the people who come to the Laughter Club.

“People suffering from long-term ill health, depression and social isolation are benefiting from having a right good chortle. It is definitely the best job in the world!”

The good vibrations come from within

WE do not need scientists to tell us that laughing is fun and makes us feel better, but research has shown that the health benefits of it are extensive.

A little bit of laughter may keep the doctor away as it is proven to relieve physical tension and stress, leaving muscles relaxed for up to 45 minutes afterwards.

A giggle fires up and cools down stress responses and increases heart rate and blood pressure, resulting in a relaxing and good feeling for the individual.

Laughter can also stimulate circulation and aid muscle relaxation, both of which help reduce some of the physical symptoms of stress.

A bit of hilarity boosts our immune system and infection-fighting microbes too, increasing immune cells and antibodies protecting us from disease.

The endorphins, the body’s natural ‘feel good’ chemicals, that are triggered by laughter can temporarily reduce pain and break the pain-spasm cycle common to some muscle disorders.

Stress and anxiety can really stress out our hearts, so a little bit of laughter to give them a much needed break can go a long way.

Laughing impacts on how well our blood vessels expand and will increase blood flow and shield our heart from future cardiovascular problems.

Laughing is also a full body workout. Some researchers estimate that laughing 100 times is as much of a workout as 15 minutes on an exercise bike.

So, have you heard the one about the…