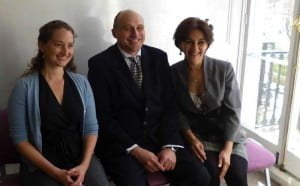 The UK ME/CFS Biobank – which won a $1.5m American grant to boost its work last summer – continues with a mini-charm offensive to keep its British stakeholders in touch with progress in Surrey tomorrow (Monday, January 27).

One of its three key researchers, Dr Eliana Lacerda, will be giving a talk about its work at a meeting being organised by the Richmond and Kingston ME Group in south London. She will be at The Albert pub, 57 Kingston Hill, Norbiton, Surrey KT2 7PX, for a 3pm start. Everyone will be welcome.

Dr Lacerda (pictured right) is the ME/CFS research project lead at the London School for Hygiene and Tropical Medicine (LSHTM) where the three team members also run the ME/CFS Biobank. This is a vital infrastructure project which is actually housed at the University College Hospital/Royal Free Hospital site where there are major, pan-disease biobank facilities.

Refreshments will be provided at tomorrow’s meeting in The Albert pub, which has a car park and is about seven minutes walk from Norbiton Station – with buses 57 and 85 stopping nearby. The ME Group says it has used the pub for meetings before, and been very pleased with the facilities provided.

Dr Lacerda works with LSHTM public health consultant Dr Luis Nacul and Dr Erinna Bowman in the ME/CFS research project. Dr Bowman will also be out and about talking about their work at an open meeting on the subject of Exercise and ME/CFS being held in The Watershed, Bristol, next Wednesday evening (February 5).

And Dr Nacul briefed ME Association trustees on the work of the Biobank at one of their meetings last summer. The MEA is one of three UK charities who have funded the work of the biobank since its inception, together with a private donor.