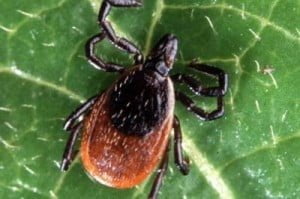 DOCTORS and scientists are working to develop the first UK-wide campaign to tackle a chronic bacterial infection that has increased 1000% in Scotland over the past decade.

Lyme disease can affect organs such as the heart and brain, resulting in a range of long-term ill-health, including vision and mobility problems. The multi-disciplinary team is being set up following concerns the condition, more common in Scotland than elsewhere in the UK, often goes undiagnosed.

GPs, infectious disease experts, microbiologists, neurologists and patient groups are to be involved in drawing up the first official clinical .guidance for treatment.

It will examine the symptoms of the disease, which is carried by infected ticks, as well as give advice about diagnosis and treatment.

Rates of Lyme disease are more than three times higher in Scotland than England, with hot spots in Highland and Tayside.

Work on the guidance will be co-ordinated by Public Health England’s Rare and Imported Pathogens Laboratory (RIPL) at Porton Down in Wiltshire and involve doctors and scientists in Scotland.

The development was announced in a newsletter by Public Health England (PHE).

“Specialists based at PHE’s RIPL are to co-ordinate the development of new UK guidance on the diagnosis and treatment of cases of Lyme disease, the tick-borne infection,” it said.

It added: “No official nationally agreed guidance has been ­developed specifically for UK conditions. A multi-disciplinary group is therefore to be convened to develop national guidance on diagnosis, investigation and treatment, including treatment of complex cases.”

Lyme disease is named after a town in the United States where a cluster of cases among children was investigated in 1975.

There were 228 confirmed cases in Scotland in 2009, according to the most recent official figures.

However, experts believe the disease is becoming more common and the true number could be up to 10 times higher.

Some cases can be relatively mild, with the patient suffering a flu-like illness which can be treated with a short course of antibiotics. However, it can also be much more serious. The disease can be passed by a pregnant woman to her unborn child and by a breastfeeding mother to her baby.

Last year, it was linked to the death of 43-year-old Scott Beattie, a gamekeeper, from Glenglass, near Evanton, Ross-shire, who had been diagnosed months earlier with the condition.

The disease can be difficult to diagnose. A blood test can be inconclusive and symptoms can vary from patient to patient and mimic those of other illnesses such as multiple sclerosis and chronic fatigue syndrome. Only some patients develop a characteristic “bullseye” rash on the site of the bite.

The setting up of the ­multi-disciplinary team to develop the clinical guidance is a major triumph for patient support groups.

Stella Huyshe-Shires, ­chairwoman of Lyme Disease Action, said: “The establishment of a multi-disciplinary group, to include patient representatives, for the development of UK guidance is a big step forward.

“Lyme Disease Action has been calling for this for many years and has laid the foundations through a project which has ­documented the uncertainties in diagnosis and treatment.”

GPs in Scotland have also welcomed the development. Dr John Gillies, chairman of the Royal College of General ­Practitioners in Scotland, said: “I think the important thing is ­raising awareness of Lyme disease. My feeling is that in rural areas of ­Scotland there is a quite a high level of awareness among GPs.

“The difficulty is that many people go to the country for the weekend, and return to where they live in urban areas, where Lyme disease is less common.

“That may be where we need to focus attention on GPs and the clinical community.”