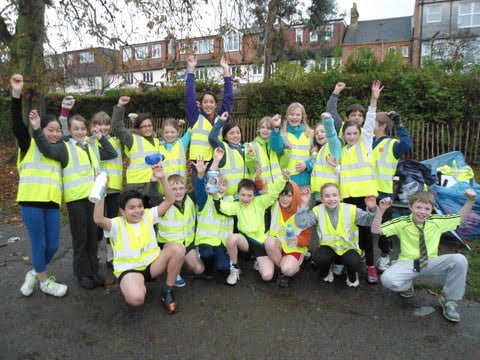 Twenty Year 5 and 6 pupils from North Ealing Primary School braved the rain after school on Monday 12th November to raise money for the M.E. Association.

Sisters Elly and Izzy Stonebridge, aged 11 and 9, organised a sponsored run with their classmates on behalf of their cousin Jamie, 23, who has suffered from severe M.E. for nearly six years.

Jamie developed M.E. following diagnoses of ulcerative colitis and then Addison’s Disease, becoming increasingly exhausted after any activity, with intense muscle pain and weakness, problems thinking and remembering, non-restorative sleep and an inability to remain in an upright position for more than a few hours.

Walking more than 100 metres or even doing cognitive tasks such as reading or talking for more than a short time can make his symptoms worse. So much so that he can end up having to rest completely for days afterwards. Despite all Jamie’s efforts to beat the disease, for the last three years M.E. has forced him to be almost housebound.

Elly and Izzy explained how they stood up in front of her class to announce their fund-raising plans. “We wanted to raise money for this really bad disease call M.E. because our cousin Jamie has it”, said Elly, adding, “We decided to do a sponsored run because everyone else was doing cake sales.”

Overseen by the girls’ mum, Jane, who works as a teaching assistant at the school, 20 children braved the drizzle after school to run as many laps as they could around adjacent Pitshanger Park. Some of the parents, along with Elly and Izzy’s Dad, and Jamie’s mum, acted as marshals.

The children showed remarkable determination, running as far as they could until dusk descended. Between them they clocked up 115km!

The end result is the amazing total of nearly £1,000. This is being donated to the ME Association in order to fund urgently needed biomedical research that build on the thousands of scientific papers worldwide which show profound biological abnormalities in the immune systems, muscles, brain and nervous systems of people with M.E.

Izzy had the last word, commenting that despite the cold and wet, “It was fun”.

Jamie was profoundly touched by his cousins’ efforts on his behalf: “That’s incredible, thank you ever so much to all of you.”