MEA medical adviser Dr Charles Shepherd was interviewed by Caroline Lavender for a feature in the Daily Telegraph on 26 November 2012. Photo by John Lawrence 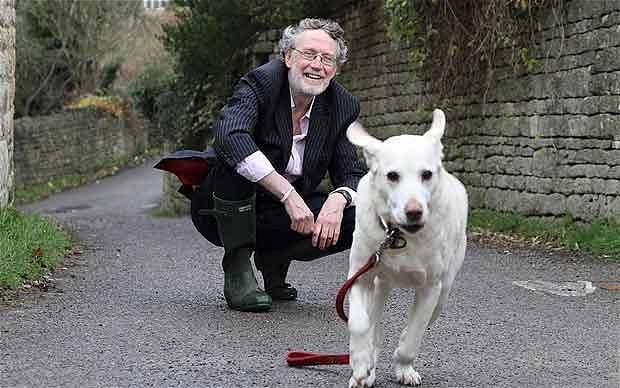 ME isn’t ‘all in the mind’, but it’s still a mystery

It was in the late Seventies that Charles Shepherd became ill with myalgic encephalomyelitis, or ME as it is better known. It was an era, he recalls, when the condition was still dismissed as “hysterical nonsense” by most clinicians. Working as a young doctor at Cirencester Hospital, he had contracted a severe case of chickenpox from a patient with shingles. “I’d been perfectly fit and healthy. The infection had resolved but I felt mentally and physically knackered and kept having to take more and more time off,” he recalls.

Shepherd says he has never been truly well since. He “plods along”, though managing to enjoy life: he regularly walks Polar, his snow-white Labrador, near the Corswold home he shares with his wife Pam, a nurse. On the day we meet, he is helping his daughter Suzie, a student in London, plan her 20th birthday (he also has two sons, Patrick, 28, and Alisdair, 31).

As medical adviser to the ME Association, Shepherd has spent the past two decades vigorously fighting the “all in the mind” attitude which, he says, is still common among the medical profession. He is convinced that this complex disorder, which has puzzled scientists for decades, has biological rather than psychological origins – although unlike some of the militant fringes of the ME community, he prefers to use reasoned persuasion rather than threats when discussing the cause.

“I unequivocally condemn people who send abusive emails,” he says, referring to the harassment of researchers, doctors and journalists – including the Telegraph columnist Dr Max Pemberton – who have speculated on the “psychological” explanation. “But I also understand why people feel so angry. A significant minority of doctors still don’t believe in the existence of ME. They refuse to diagnose or manage it – that is totally unacceptable.”

Now more commonly known as chronic fatigue syndrome (CFS), ME has come a long way since it was derided back in the Eighties as “yuppie flu” (its typical victim supposedly being a high-flying young professional). Today, it is recognised by the World Health Organisation, the National Institute for Health and Clinical Excellence (NICE) and much of the medical establishment as an often severely disabling disease, characterised by a bewilderingly wide set of symptoms, the chief ones being profound fatigue and widespread muscle pain. Difficulties with concentration and memory are also common.

Yet the debate over the cause of ME continues. Is it biological, psycho-logical or a combination of both? The controversy flared up again in September, with the publication of findings finally disproving the theory that ME is linked to XMRV and MLVs, viruses that had previously been isolated in tissue samples taken from ME patients. Scientists at Columbia University, New York, found compelling evidence that detection of the viruses was a result of contamination, corroborating two previous studies’ findings.

The collapse of this theory, greeted with dismay by some ME patients, came as no surprise to Shepherd, who says he was always sceptical of the “hype” surrounding it. “In the US, people spent a lot of money getting tested (for XMRV) and getting anti-retroviral drugs, but we have always advised against this because the research [from the University of Nevada, published in 2009, that implicated the virus] hadn’t been properly evaluated or replicated.”

By taking this stance, Shepherd himself became the target of hate mail. “People get so desperate and put such faith in the findings, they find it hard to have them criticised.”

ME researchers now view the illness as having three separate components: first, a [probable] genetic predisposition; second, a precipitating factor – which for 75 per cent of patients is an infection, usually viral, although occasionally other immune stressors such as immunisation may be a trigger; and finally the development of the condition itself. Other signs include fainting, low blood pressure, and irritable bowel syndrome.

The origin of such symptoms remains a mystery. One theory gaining favour is that ME patients have an aberrant immune response which fails to “switch off” after the original infection has resolved itself. In particular, it is possible that some ME patients have a surfeit of cytokines – chemicals produced by the immune system.

Another theory is that an auto-immune response (in which the immune system produces antibodies that attack the body’s own cells) may be involved. Other research is looking at potential abnormalities in the muscles of ME patients, with evidence that some sufferers produce excess acid when they exercise (Shepherd himself took part in research on muscle tissue – and still has a scar on his leg to prove it).

One study at Liverpool University is examining potential structural abnormalities in the mitochondria – cell components which produce energy in a usable form – in skeletal muscle.

A further focus of research is abnormalities in the hypothalamus. This tiny pea-shaped gland in the brain regulates a number of functions including hormone secretion (via the pituitary and adrenal glands). Problems here could help explain symptoms as diverse as sleep disorder, low blood pressure, temperature disturbance and heart,bowel and bladder problems. “A large number of papers demonstrate that ME patients have abnormalities in the hypothalamic-pituitary-adrenal axis,” says Shepherd.

In particular, he says, ME patients have been found to have lower levels of cortisol, a hormone secreted by the adrenal glands. He concedes that ME researchers are still “fitting together the jigsaw puzzle”, with some way to go before treatments are developed. “We have reached a point where there are drugs that would be worth trialling,” he says. But clinical trials are expensive to run and the pharmaceutical industry, the only realistic source of such funding, has shown little interest.

In the meantime, can graded exercise (a programme aimed at building activity levels) and cognitive behavioural therapy, advocated by NICE, help with the symptoms? “The NICE guidelines on ME are not fit for purpose,” Shepherd argues. “They reflect the belief that this is a psycho-social illness.” He himself is a fan of pacing – a technique which involves listening to your body to find the right balance between rest and activity. “I go swimming and walking, but within the limits of what I can do.”

He also feels progress has been stymied by rebranding ME as chronic fatigue syndrome. “Doctors never liked the term ME because it refers to widespread inflammation of the brain and spinal cord, which has never been confirmed,” he says. “But calling it CFS has made research trickier because CFS is an umbrella term for different pathologies – it’s a bit like grouping together all the different kinds of arthritis and saying they have the same cause.” He prefers the term myalgic encephalopathy, which reflects a significant neural abnormality in the brain.

He is encouraged, though, by progress at the Medical Research Council, where an expert group to encourage high-quality research into ME was set up in 2008, and where, last year, £1.5 million was ring-fenced for this purpose. So far funding has been approved for five studies – among them mitochondrial function and cytokine production in muscle tissue, immune system involvement and autonomic dysfunction.

So is Shepherd discounting entirely any psychological component in ME? “I have no problem,” he replies, “with the idea that the mind affects the body and the body affects the mind. Of course, people who are chronically ill get depressed and have psycho-social stress. But the point is that too much energy and money has gone into research based on the belief that ME is psycho-social – when the right route is biomedical.”