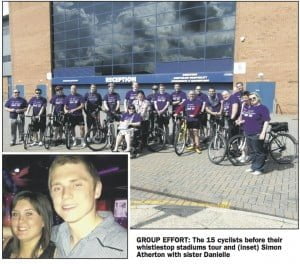 From the Wigan Evening Post, 26 July 2012 (story by Natalie Draycott).

CYCLING between six of the North West’s Rugby League grounds is a tiring task, but for Wigan man Simon Atherton it was well worth it because of his sister.

The 26-year-old from Orrell gathered 14 of his rugby-playing mates to cycle around six rugby stadiums, to raise funds for ME Association which supports sufferers of this exhausting condition of which Andrew’s sibling Danielle is one.

Wigan Warriors’ DW Stadium was, naturally the first port of call, followed by the homes of Leigh Centurions, Salford City Reds, Warrington Wolves, Widnes Vikings and St Helens, before returning back to Wigan.

By the time the saddle-sore party had completed the tour they had clocked up more than 54 miles.

Simon took on the challenge for his 23-year-old sister who was diagnosed with ME 18 months ago.

He said: “It has been hard for all of us. She can’t really do much in terms of going out and it has put a lot of strain on her.

“She used to dance and she can’t do that any more. Going on family holidays is impossible as it takes so much out of her. She can’t even walk up and down the stairs – it is so debilitating.

“This fatigue coupled with the pain in joints and muscles, poor memory and concentration prevents sufferers from having a normal lifestyle, and in some cases, like my sister’s, prevents them from working.

“She is now a different person, as she used to be happy-go-lucky. It has been hard for me to see her like that.

“It took a long time for me to come to terms with what’s been going on, so this is my way of saying I will do what I can for her.”

He added: “Thanks to everyone that took the time and effort to join us, we have raised awareness for a very worthy cause that is dear to my heart.

“I am extremely proud of everyone’s efforts and can’t thank them enough. After 20 miles, we felt the pain, but we kept going, as it was worth it.

“Thanks to the ME Association my sister has an occupational therapist and she is trying to arrange a support group for other people in Wigan who have ME.”

To donate to Simon’s cause visit www.justgiving.com/simon-atherton1