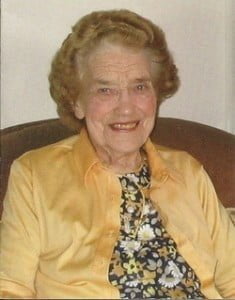 A service of thanksgiving for the life of Betty Hughes MBE, president of Worcestershire ME Group, will be held in Pershore Abbey next Tuesday (June 12) at 2pm. Mrs Hughes, a former mayor of Pershore, stood down as a town councillor in May last year after 28 years of elected service to her town and had raised many thousands of pounds for the Worcestershire ME Group – often through garden parties at her home.

She became highly active and vocal in her support of the M.E. cause after her granddaughter Naomi Whittingham went down with the illness. Naomi’s story was told in Natalie Boulton’s 2009 book ‘Lost Voices for a Hidden Illness’, published by Invest in ME.

Describing the book at the time, Mrs Hughes wrote:

“Over the past twenty years, I have felt that suffering as my granddaughter Naomi (who also contributed to the book) has been ‘trapped’ in this illness. Her support through groups like our Worcestershire ME Support Group and the wider network of other ME sufferers, has brought her a sense at times, of there being ‘light’ through the ‘darkness’.”

Mrs Hughes died on May 29 at the Worcestershire Royal Hospital, aged 89. She leaves a son, Tom, and three grandchildren.

On Tuesday at her thanksgiving, there will be family flowers only. People wishing to make a gift are invited to make donations to Mrs Hughes’ favourite charities; cheques payable to E Hill & Son Donation Account, may be sent to Fairfield House, Pershore, WR10 1HZ.