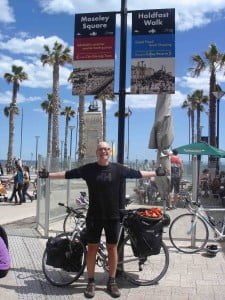 A charity cyclist who pedalled 33,000 kilometres around the world is hoping to boost motivation in Masterton tonight.

Eric Smart will be speaking at the Masterton Cosmopolitan Club from 7pm about his mammoth ride.

Four years ago Mr Smart, 47, decided to launch a global charity cycle ride to help raise funds and awareness of myalgic encephalopathy (ME), a disease that had taken him 20 years to overcome.

He said his mother had “bathed me and brushed my teeth” at their Aberdeen home in Scotland during his lowest ebb, but he had slowly recovered after years of yoga and massage. The ride was a celebration of his return to life.

He called his two-year trip Aberdeen2Adelaide2Aberdeen.

Mr Smart said he had raised about $25,000 for the British ME Association after cycling through 20 countries on a shoestring budget, and was keen to share his adventures as a motivational speaker.

He had included New Zealand on his charity ride but had sent the bike he took around the world back to Aberdeen.

Mr Smart, who has been staying with friends near Gladstone for the last couple of months, qualified as a yoga teacher and masseur after his struggles with ME.

“The ride was an exhilarating experience and it’s been an unusual past four years. I’ve only been home for six months out of that time and I’m not sure where I’m going to next. But we all face different challenges every day and I’d like to show people as a motivational speaker that you can challenge yourself and get even more out of life.”

Admission tonight is by a requested donation of $5, Mr Smart said.

Picture shows a jubilant Eric after reaching Adelaide in Australia in 2009 during his round-the-world bike ride for the ME Association.