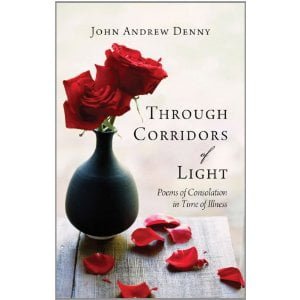 Call me old-fashioned, if you like – but all the senses are gratified when I pick up this anthology. The cover is beautiful, the type-face exquisite, the poems are well laid out on the pages with tasteful line-drawings sitting comfortably in the larger white spaces and the paper quality feels quite superior for a paperback.

When it popped out of the envelope for the first time, it even had that exciting, new book smell about it! There’s no cheap e-book feel about it.

The contents remind me of that childhood find, Palgrave’s Golden Treasury – though the selection would have been less random.

These poems have been chosen to illustrate the theme that they will help the reader in various ways to cope with illness and loss of one’s old self; Mr Denny devotes space in his introduction to reviewing the evidence for changes in the neural pathways that can occur after spending quiet time with fine, meditative verse.

He describes a beneficial effect of the careful reading of poetry. Obviously there’s a sub-text is that, even if you don’t think reading poetry is quite your bag, try it as a therapy. You might even find it addictive!

In the preface, he writes:

“Poetry can have the effect of slowing the reader’s mind down to its alpha brainwave state of highest creativity, which it shares with dreaming. It also parallels hypnosis (and meditation) in the way it stimulates the body’s production of endorphins – technically, opioid neuropeptides, which resembles opiates in their analgesic and euphoric effects.

“When my waking-dream state took me into Masefield’s world of seafaring and comradeship, or Yeats’ idyllic Innisfree, I found after several months that my feelings of being trapped began to dissolve as if I had really gone ‘down to the seas again’, and heard ‘lake water lapping with low sounds by the shore.”

There are also poets who are writing and thinking today – like Helen Dunmore and Victoria Flute. I particularly like the following poem by Victoria, who lives in Suffolk with her ME. It’s modern, without a hint of old fogey-ness:

The cure you would like to have
is currently unavailable.
Please try again later.

The life you are trying to reach
knows you are waiting.
Please hold.

Your hopes are important to us –
we will be with you shortly.
Please hang on.

The ME Association had a very tiny part to play in the production of the book, though it was given grudgingly at the time.

I had received an email in 1999 from Mr Denny telling me of his plans for the book. He asked for permission to use the magazine in order to appeal to people to send in their suggestions of material they would like to see included.

I agreed but asked Mr Denny if we could please just publish his email address as the contact point, and so avoid my office being used as a postbox.

I must have been going through one of those periodic phases: ‘Pah, poetry! who wants it! Why don’t people just send in superb stories or decent letters to the magazine.” I was just being churlish – and a couple of readers rightly grumbled.

The new, mellower me is still dipping into Through Corridors of Light and quite enjoying the poetry, probably for the first time in my life.

But please don’t bombard ME Essential with requests for your poetry to be included. There just isn’t the space for it! 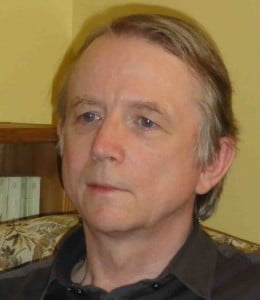 John Andrew Denny was born in 1953. He studied music at Edinburgh University and was a musician and publishers’ editor in London when he fell ill with ME/Chronic Fatigue Syndrome in 1991. He now lives in Somerset.