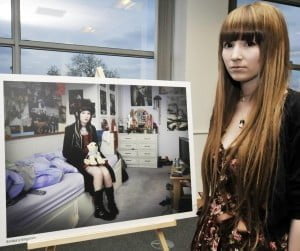 A PHOTOGRAPHY student aims to highlight an illness through her latest work.

It features those affected with the condition, along with the medics and wards at the front line of carrying out research and treatment.

The PhD student, in her second year of her course at Sunderland University, is working to encourage a better understanding of the illness, which began to affect her daughter Emilia, 20, seven years ago.

The display of photographs is the latest in a series Juliet has held as part of the Life With Art project. It is supported by ME North East, of which she is a trustee.

Juliet, who lives in Bournmoor and is also mum to Callum, 19, said: “When I first went to meet some of those who are carrying out research, I found there were some amazing people, and it was good to see there is an understanding of the illness and lots going on out there to try and fund a cure.”

Hospitals which feature in the exhibition include Newcastle’s Royal Victoria Infirmary, Freeman and General.

Other images feature people with ME pictured at home, such as BBC weather forecaster Trai Anfield, with the words alongside them collated from interviews.

Among them are accounts of how people began to feel drained of energy, and at a loss as to why they felt so unwell until they were diagnosed.

It also tackles how they dealt with people who thought they were being lazy, or lying about the reason why they were struggling to live an active life, as well as how they have overcome problems.

In Trai’s case, she fell ill shortly after a car crash.

She says it has been a curse, but has made her stronger.

Trai studied for a degree through the Open University while confined to bed over a seven-year period, pinpointing her first-class result as one of her proudest moments.

The exhibition also offers an insight into how ME North East has offered support.

It was chosen by David Piggot, trustee of Life with Art, a charity launched to help young and disabled people through education in the arts.

Juliet’s PhD studies are supported by the Art and Humanities Research Council.

The art exhibition will be on show from 5pm to 7.30pm, in the Gemini Building.

Picture shows Juliet’s daughter Emilia next to a portrait of herself by her mother.