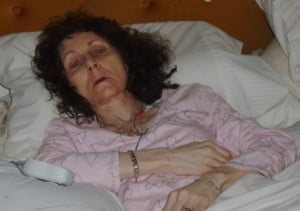 An ME patient who has been housebound for the past decade says she is devastated after Sheffield NHS refused to fund treatment at a specialist hospital unit which could improve her condition.

Wendie Evison, from Greenhill, was distraught to hear NHS Sheffield won’t fund a stay at the Leeds and West Yorkshire CFS/ME Service, due to her “failure to engage” with local services.

NHS Sheffield say that was a “miscommunication” and there was no intention to imply the 57-year-old had not co-operated with Sheffield health workers.

Instead, they say the rejection was based on the severity of Mrs Evison’s symptoms.

But a letter from the Sheffield ME Service, based at Fairlawns in Middlewood Road, supported the application – which is now more than 12 months old.

In a letter to Mrs Evison’s GP at Woodseats Medical Centre the team said: “We support the referral considering the duration and increasing severity of Mrs Evison’s illness and consider our service is currently unable to provide the intensity of intervention and therapeutic environment that she requires.

She also has additional health complications including fibromyalgia and osteoporosis. She spends most of her day in a darkened room – coming out for around an hour at lunchtime and dinner time.

The couple are devastated that the request, which they see as her only prospect of improving her quality of life, has been turned down.

They have now been given leave to appeal.

Mr Evison said: “At times things have got so bad she’s said she doesn’t want to carry on – because really, what kind of life is it? Wendie has co-operated all the way along with services as best as she can.

“In our view, their decision was based on money.

A spokeswoman for NHS Sheffield said she could not comment on individual cases.

“Decisions on Individual Funding Requests for exceptional or unusual treatments are made based upon evidence provided to the panel, with some requests being declined on the belief that they would not provide significant clinical benefit to the individual at the time of the decision,” she said.

“Our panel deals with exceptional requests for the funding of clinical treatments using both national and local guidance to ensure care is fairly allocated to all patients in the city, which we understand can be a difficult process for the patients involved.

“Decisions may be re-considered if further information is provided.”

Letter published by the ‘Sheffield Star’ on 4 August 2011

I WAS appalled, yet not surprised at the lack of support and help the bedridden lady suffering with ME received.

As a sufferer myself I’ve received very little help and sometimes even scorn from the NHS regarding my illness.

One doctor told me it was ‘all in my head’ and I’d ‘get out of my house if it was on fire’. Another gave me a sick note for four weeks then said I’d need to look for a new job after that. This illness lasts years.

It is misunderstood by the public, employers and the NHS. It is very depressing not being able to do all the things you used to, giving a very poor quality of life. There is little funding for researching as it does not kill you, but it does ruin your life. Most people end up losing their job and their home and often their partner, leaving them with nothing.

The benefits system is designed to make you give up, even for people with lots of energy. The questions are aimed at particular types of illness/disability (you appear to need to have mental health issues or not be able to move at all to qualify) and are not relevant to this illness. My experience was exhausting and frustrating and all the help I got from volunteer agencies was advice not to fill in forms without expert help.

Not a straightforward process, especially for someone who is possibly bedridden with concentration problems.

I was assessed for my benefits by a nurse, who knew nothing about ME He also said he would not be making any assessment of my symptoms and that the information he noted would be passed to someone else to judge.

The illness is covered by the Disability Discrimination Act. However, this only states that employers have to make ‘reasonable’ adjustments. So all they have to say is ‘it’s not reasonable’ and do nothing.

I often wonder how all those who dismiss this illness and reject support to those who need it, would feel if they or a family member got it.

This isn’t the first time ME has featured in the news. There was the case of the young girls whose mother assisted her with suicide. As a sufferer I understand why.