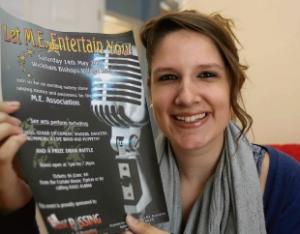 A STUDENT is hoping to raise public awareness of an illness with a special variety show.

Hannah Miller, 20, of Winston Avenue, Tiptree, is studying education and early childhood development at Anglia Ruskin University, in Chelmsford, with a view to becoming a teacher.

However, for the last three years she has suffered with chronic fatigue syndrome, more commonly known as ME.

The cause of the condition, which triggers disabling tiredness, is unknown.

It took a year for Hannah to be referred to the ME clinic, at Colchester Walk-in Centre, in November 2009.

She said: “My muscles got really weak. I had to take time off work and take a break from my studies.

“Eventually I ended up on crutches for a year.”

As well as disruption to her day-to-day life and physical problems, Hannah grew frustrated at the lack of understanding shown by other people.

She said: “What was often worse than the pain and symptoms I was experiencing was the lack of awareness.

“When you first become ill your appearance doesn’t change, so a lot of people don’t believe you, or don’t have an awareness. It becomes very isolating.

“That’s why I decided to turn me being ill into something positive and to help other people with the illness.”

In attempting to raise awareness, Hannah has organised a variety show, due to take place at Wickham Bishops Village Hall, in Church Road, Wickham Bishops, on Saturday, May 14. Doors for the event open at 7pm, for a 7.30pm start.

Acts include dancers, a puppet show, stand-up comedians, singers, drummers and a live band, coming from across the county.

Hannah said: “I’m hoping there will be about 250 people. There is a range of acts, so hopefully it will appeal to everyone.”

In addition to raising awareness, money raised from the variety show will go towards the ME Association, which provides information, support and advice for people who are affected by ME and other associated conditions.