We are very sorry to have to report the death of Dr Anne Macintyre – a doctor with a longstanding personal and professional involvement with all aspects of M.E.

Unfortunately, in addition to having the disease herself, Anne had other serious health problems and had been in poor health for quite some time.

She died peacefully on Saturday November 24th at her home in Tiverton in Devon.

A friend and colleague

Anne will always be remembered as an extremely kind and compassionate doctor who helped large numbers of people with M.E. over many years.

She helped them obtain a diagnosis, to get appropriate management advice and she provided support when they were battling with the DWP over benefit entitlement.

She will also be remembered for her book ‘M.E. A Practical Guide’ which was extremely well received and is still regarded by many as being one of the best.

Anne was a medical adviser to the ME Association for many years and conscientiously carried out this role until she was unable to continue because of ill health.

At this point she became a Patron of the ME Association.

Anne will be very sadly missed as both a friend and colleague.

Jenny Wilson, who became a close friend to Anne and lived close to her in Devon, spent much of the past few months supporting and helping to care for her. Jenny was with Anne during her last few days and kindly wrote this for us on Sunday, 25th November.

“I am writing to share the sad news that my friend Dr Annie Macintyre, Patron and past medical adviser to the ME Association, died during the night.

“I have known Annie since 1987, when my friend Dr Richard Sykes and I began the Bristol ME Association Support group. Annie lived in Bristol having just moved from Bath and she contacted the group.

“However, it wasn’t until the late ‘90s that we became close friends when she took me to her home after giving me a medical assessment as I was too severely ill to care for myself. From then on, we maintained a continuous friendship, phoning each other most days. 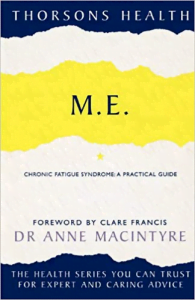 “I used to refer people to her when they phoned me for advice about ME if they needed diagnosis or other help which only a doctor could provide. We used to joke that we ran an underground medical system.

“Annie, as many of you know, wrote one of the first books for patients on ME and it proved very popular. She was hoping to update it, but her life over the past few years was, instead, taken up with travelling to such places as St Helena to visit familiar haunts where she had been the island’s doctor.

“Annie especially loved visiting the island of Lundy off the North Devon coast with friends and, being a hardened Scot, enjoyed the Spartan………and very windy……life there.

“Before she became ill, she had also been a ship’s doctor and then specialised in eye diseases and spent time working abroad.

“In recent years, she had a camper van that she loved to take around the country and which she continued to drive even when she became very ill over the past year. She also, on a number of occasions, visited the Irish ME groups of which she was a patron.

“Annie suffered from Rheumatoid Arthritis and a couple of years ago she developed serious lung problems; a complication of the condition. In April she was offered a new drug treatment, but unfortunately, she had a severe reaction to it and it initiated a very rapid decline.

“The last months have been very difficult as Annie, with her usual courage, bravely struggled with her increasing breathlessness. During much of this time, she remained in her flat, which is not far from me, with her two cats.

“I have spent a lot of time over the past months sitting beside her bed or talking with her a few times a day on the phone when not able to be with her.

“Last Friday, while we were chatting, she experienced an abrupt and serious deterioration from which she never recovered.

“The last few days were very challenging, but she became more peaceful by Thursday. I was planning to sit with her today, but last night Annie quietly slipped away.

“I will greatly miss her.

We are going to open a book of condolence for Anne at the ME Association where messages can be recorded.

If you would like to contribute to this by email, please send your message to: admin@meassociation.org.uk

If you would like to send a written message for this book, or a condolence card that can be forwarded to Anne’s family, please send this to: