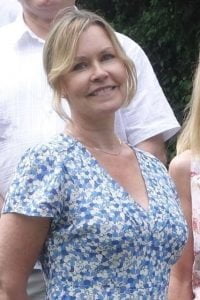 When Nicki Strong’s two children were diagnosed with ME, it turned her family’s world upside down. The 56-year-old charity worker explains how through the turmoil, she found a voice and determination she never knew she had.

Nicki Strong used to be a member of a book club. Then seven years ago, she simply stopped going. “I was too devastated to concentrate on reading novels and I couldn’t face hearing people talk about their kids,” she remembers.

The other book clubbers would talk about the worries every parent has for their kids – the late nights, empty bank accounts, relationship break-ups. Nicki would listen sympathetically, but inwardly wishing that their worries were her worries.

Her children, Jamie and Lara, were both diagnosed with ME (Myalgic Encephalomyelitis), within two months of each other, shortly before Christmas 2008 when they were 19 and 17 years old. Their lives – along with that of Nicki and husband Richard, an IT consultant, changed forever.

“Jamie was so ill that he was nearly paralysed and in awful pain. He could barely make it from his bedroom to the sofa downstairs. It was like a living death. No-one would believe it unless they had seen it.

“Lara fought her way through A-levels and got into university. But she was so poorly, so permanently exhausted and wrung out by her illness, she basically did her degree from her bed.

“We went from having a normal family life, with two active, healthy kids, nice house and holidays to this hellish experience of watching them suffer and not being able to help.
“Calling it a nightmare wouldn’t come close to what it felt like.”

THE FAMILY SPENT THOUSANDS PAYING FOR TREATMENTS THAT DIDN’T WORK

Nicki cut the hours she worked for a national charity which supports parents, to look after Jamie and Lara. Financially, the family spent thousands paying for treatments they hoped would help.

“Jamie, who was living at home, was isolated because he was so ill. But I felt isolated too. ME is so misunderstood.”

It became, she says, easier simply not to talk about what was happening, or tell people about her children’s illness.

Emotionally, she found it difficult to gain support from others because of people’s misconceptions about the illness. Fortunately, after some educating, she felt she could talk to her extended family and close friends.

“But eventually I reached a point where I didn’t really care what people thought. The poet Maya Angelou said: ‘There is no greater agony than bearing an untold story inside you’ and that’s really how it felt.

“And when you start talking about ME, you realise how many people have it – or love and care for someone who suffers from it.”

The 56-year-old became a trustee for the ME Association, a national charity which supports those with the condition and also funds research.

WHEN A DISMISSIVE REMARK BY A JOURNALIST SPURRED NICKI INTO ACTION

In March 2012, in response to a dismissive remark from a journalist, Nicki, along with a few other families, succeeded in getting one of the first sympathetic stories about ME in the tabloid press.

She also organised a ‘lie-in’ protest in front of the Houses of Parliament for ME Awareness Day the next year.

And in September last year, through Lara becoming involved with another charity, she organised a #MillionsMissing event in Oxford – part of a global protest calling for more awareness and research into the illness.

The event saw a hundred pairs of shoes neatly lined up in front of the city’s iconic Radcliffe Camera, to represent those with ME who could not be there to protest in person.
Each pair of shoes had a tag, a tag which told a story as individual as their owner and one everyone with the illness will recognise; pain, isolation, hopelessness, misinformation, anger – and perhaps most of all, loss.

Nicki has never liked putting herself forward, she says. She still doesn’t. But the last eight years have made her realise staying silent is not an option.

“As someone who is healthy, one of the things I can do is help raise awareness of ME and what it does.

“Because part of the problem with ME is that the ones who have it aren’t physically well enough to do it. So by talking about it, getting involved in campaigns like Millions Missing, we can help get the word out there and create more understanding and urgently needed biomedical research.”

Jamie, 27, is now working a few hours a week as an admin assistant at the University of Oxford helping with new research into the illness. Lara, 25, who struggled through university to gain a law with criminology degree, is living at home and unable to work because of the fluctuating and relentlessly devastating symptoms.

But Nicki has rejoined the book club. What’s more, her book club friends showed great empathy in agreeing to read One Last Goodbye, a heartrending book about Lyn Gilderdale’s terrible struggle with ME. A small thing. But a start.