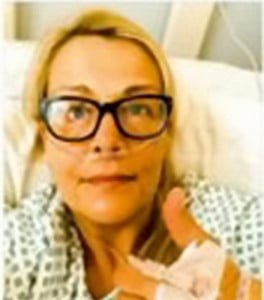 A mother who has suffered from a mystery illness for more than 20 years has finally discovered the source of her ailment – a tick bite.

Joanna Baskett, 42, has undergone 26 operations and been on 32 different medications over the last two decades in a bid to cure her unexplained symptoms.

But she has now been told she is suffering from Lyme disease, a bacterial infection which she probably picked up from a tick bite while on a family holiday in the 1990s.

The mother-of-three is so crippled by the disease she has been forced to give up her job and spends around 90% of the day in bed.

She is now hoping to raise enough money to pay for vital treatment which is not available on the NHS to improve her quality of life.

“I have been chronically ill for over 20 years, the last eight terribly so.

“I have no quality of life. I had to give up work as I’m too weak and sick to even be awake for more than a few hours a day. I can barely walk or sit.

“The last four years have been spent mainly bedridden. This is tough as I’m a single parent to school-age children and have no family help or anyone around.

“I want the chance to live, I deserve a life, and so do my children. I want to be here for my children growing up.

“I’m slowly wasting away and if this carries on without treatment or help eventually I will die, leaving my children alone.”

Joanna was just 23 when she went on a once-in-a-lifetime holiday to Florida with her family.

While on the trip she began feeling unwell and soon noticed a round rash on her body with a dot in the centre, which she thought was a mosquito bite.

She then began suffering from a catalogue of illnesses and was variously diagnosed with Glandular Fever, the Epstein-Barr virus and even ME.

“Lyme disease has taken a hold. I have no immune system. The smallest thing floors me, even a simple cold,” she said.

“I have low grade fevers all the time, constant pain and neurological problems, cognitive issues, co-ordination problems, spasms, tremors, drenching sweats and many other nasty debilitating symptoms, too many to list.

“At the time I thought it was a mosquito or spider bite, I only made the connection this summer after finding out about bullet rashes, ticks and Lyme disease.”

The expert told her that she had a classic case of the disease and that she needed to start treatment as soon as possible.

Joanna is now attempting to raise money towards testing for the disease as the advanced tests for the illness are not available on the NHS.

She is also hoping to fund immunotherapy treatment and a juice programme that would help boost her immune system and fight the illness.

“I cannot afford comprehensive Lyme disease and co-infection testing which I desperately need, let alone any treatment,” she said.

“The main successful route to treat Lyme in conjunction with immunotherapy is long-term IV antibiotics and antivirals – this isn’t available in the UK, only parts of Europe and the USA.

“This treatment costs approximately £10,000 a round and the average chronic Lyme patient needs five to eight rounds of this therapy.

“I am looking at diet and juicing and raw food as a supportive treatment but this again is unaffordable to do this properly on state benefits.

“There is then the issue of having to get my children tested as they were all born after the bite. I worry about their future and their health and if it has been compromised.

“I worry that they will end up becoming severely disabled like me and possible painful premature death, if undiagnosed and untreated.

“My future is bleak, confined to a bed I have no life, I am existing not living, I have no social life what so ever.

“At the moment my life is futile I’m merely existing but not living, but I won’t give up hope.”

To find out more about Joanne’s battle or make a donation go to her Facebook page.