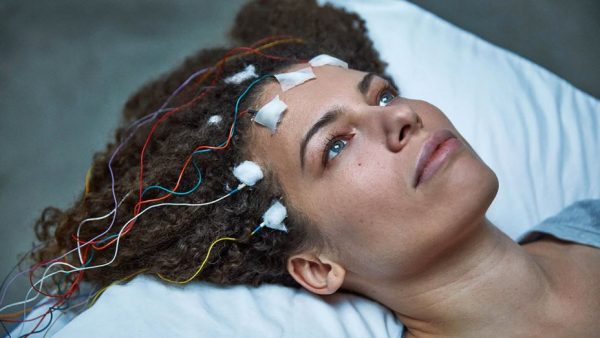 American filmmaker Jen Brea is fast becoming a global voice for those with ME. For ME Awareness Day, she talks to the ME Association’s SARAH STAPLES about the success of her Sundance and Nashville film festivals award-winning documentary called Unrest, why she is proud to be an advocate for those with the illness…and knitting.

January 2013. Jen Brea is lying in a New York hospital, wracked by pain. Her head is pounding, her body barely able to move. A doctor walks in, flicks through her notes, reads a diagnosis of Chronic Fatigue Syndrome and tells her to go home and take an aspirin.

“He didn’t examine me, he barely looked at me,” remembers the 34-year-old Harvard and Princeton graduate with no trace of malice or anger. “And that was when I decided I had to make a film. I needed a way to change the attitude of the profession.”

Brea had never made a film before (“Mom used to take us to the theater and we would watch the art house films and foreign films when I was a kid.”) She loved the big screen, and describes it as her ‘first love’ – but making a film was like telling your parents that when you grow up you want to be an astronaut – a fantasy.

“It was as if I it was only when I got sick that I felt brave enough to do it,” she reflects.

HER PERSONAL JOURNEY INTO THE DARK VOID

The film she made – her personal journey into the dark void – is Sundance and Nashville films Festivals award-winner Unrest, in which she lays bare with relentless honesty her own ME story, interweaving it with the Skype interviews she conducts with four other patients worldwide – one in the UK – and who she tracks down through YouTube videos and internet groups.

Most discomforting is the story of Danish teen Karina, whose parents were horrified when police virtually raided their home and forcibly removed her to a state facility. Denmark is one of the countries that categorises CFS as a psychiatric condition. It took three years of protest to get her removed. Karina’s condition had not improved.

It could be, and let’s be brutal, 90 minutes of cinematic misery. What lifts it is Brea’s engaging warmth, her openness and her unflinching willingness to let the camera see her at her most vulnerable, a fact which has seen the critics leave screenings well pleased with its reflective subtlety and intelligence (“tender intimacy and an advocate’s urgency – a revelation and a call to action” says one).

In some ways, making film has proved to be her rock in the storm. “Without the film, without the art of expression, without those two things, I think I might have given up,” she says at one point.

Brea herself, the woman of the moment, is in the eye of the storm.

Post Sundance, Unrest went to the prestigious South by Southwest (SXSW) Festival. It’s due to be shown on an American network station next year. She’s just back from Copenhagen, where it had its European premiere. She’s shortly off to Toronto for its Canadian premiere. Negotiations are ongoing for it limited cinema release in other countries – including the UK.

“The film’s exploded,” she says with a likeable smile that reaches her almond-shape eyes. “It’s amazing.”

Unrest took two years to make. Brea’s health meant she would film for a day, and then be in bed for a month.

“At the beginning my husband, Omar, wasn’t sure about me trying to make a film. It was killing me and saving me at the same time. He could see it was making me ill, but at the same time I was telling him that I needed to do this.

“It was extremely tiring, but I feel really privileged to tell a story that hadn’t been told. I heard stories of people who were living the same way I was and who had known what it is to be on the top of your life and then be knocked off it.”

Brea, like every ME patient, knows the before and after of the illness. She was a 28-year-old Phd student at Harvard, engaged to the love of her life, Kenya-born internet analyst and Princeton professor, Omar. In her free time, she loved travel, kayaking, hiking – and had barely had a day’s illness in her life.

“You know, I had met this amazing guy, we were going to have a family…I think often in your twenties if we’re honest, we have a sense of invincibility,” she grins.

And then all those well laid plans were blasted like ice in a crevice.

One day she suffered from a fever which saw her temperature skyrocket to 104.7.

SHE THOUGHT CHICKEN SOUP AND REST WOULD SEE IT OFF

She thought chicken soup and rest would see it off. Instead, three weeks’ later, she was so dizzy that she would walk into the walls of her home. The slightest noise would see her flinch in pain – even the sound of Omar walking barefoot in the next room. She lived in acute pain.

A string of consultants could find nothing wrong. Then a neurologist told her that it was all in her mind, a reaction to some long-past trauma that she couldn’t even remember. Brea was training to be a social scientist, she says, respected her fellow professionals’ opinions.
That day, she walked the two miles home. “As soon as I walked through the door I collapsed.” She would spend most of the next two years housebound.

“I was angry for a long time and I coped with it by not thinking about it too much – it was a door that I wouldn’t open. But breathing and being angry are hard to do,” she says lightly.

The film was her way of walking through the long-shut door. Through it, she heard stories that made her realise she was not alone. Jen Brea, at home in New York, was not the only one feeling isolated, ignored and stigmatised by science. There were others, an estimated 17 million globally, suffering the same.

But despite this, she remains resolutely upbeat about the future and in particular the use of tech to bring patients globally together.

“THE MORE WE CONNECT, THE FASTER WE’LL GET”

“We have to believe, I think. There are millions of people around the world, from all parts of society. I think maybe it’s because I’m an optimist, but no one country is going to do it alone, the more we can connect together, the faster we’ll get to where we want to get.

“There’s so much happening in research in the UK, Norway, Scandanavia and out her. We have a movement that is pushing on the same side. I don’t feel I can walk away. Until we are like any other disease, and on an equal basis, when patients have access to treatment…that’s what I’m fighting for.”

The film takes a step in making the story of ME sufferers mainstream. She politely rejects a suggestion that she is becoming the global face of the illness, preferring instead to say she is an advocate. Actually, she later confesses, it’s weird putting herself in public view. “I’m actually quite introverted.

HER ILLNESS IS STILL VERY MUCH PART OF HER LIFE

Brea’s illness, that unwelcome guest, is still very much part of her life. She uses a wheelchair when she goes out. “Now I’m almost ‘normal’. I get tired if I talk too much. I’ve got well enough that I can do the essential things that matter to me. I enjoy my life. It’s a very different one to the one I expected to have, but I enjoy my life.”

She gave a TED Talk earlier this year – short films shared online to spread ideas about everything from high finance to IQ scores. Hers has been viewed online more than a million times. Perhaps the most moving part is when the audience wave, silently smiling at her, as she grins widely back. They were asked not to clap, because Brea’s sound sensitivity would have found it unbearable.

“My life right now is work and watching movies on NetFlix with my husband. I don’t have hobbies anymore. What’s been hard is that I was always active before I was ill. Weekends were about being outdoors.

“But I had a friend come over and she taught me how to knit. Sometimes I haven’t been able to read or watch movies, but I could do that. All the things I do now for fun are things that I didn’t want to do EVER!” she jokes.