Reports that Chronic Fatigue Syndrome, also known as myalgic encephalomyelitis (ME), can be treated with psychological therapies have frustrated those living with a very physical condition

For Bill Clayton, there has been little progress in understanding ME since it was first derided as “yuppie flu”.

Now being considered for NHS use, trials of the online behavioural therapy scheme in the Netherlands showed 63 per cent of the patients given therapy had no symptoms after six months, whereas just eight per cent recovered without it.

But treating ME as a condition of the mind, rather than the body, has angered and frustrated many sufferers.

“There has not been any progression in thinking,” Bill said, “For someone to say a talking therapy will help … It may help the related issues but it won’t help the ME whatsoever.”

His opinion is echoed by the ME Association, which has said ME is a physical illness which requires biological answers.

“It’s an illness that affects the whole of your being,” Bill, 59, said, “Rather than saying it is fatigue, see it as your body closing down. It’s more than being tired. I struggle to form words and my jaw locks up. I was in Asda a while ago and the lights and noise got to me and I froze in the middle of the shop. The staff had to take me out in a wheelchair and I couldn’t find the words to say what was wrong. Your brain closes down and stops working. I couldn’t move my legs.”

Affecting 250,000 people in the UK, ME is characterised by overwhelming mental and physical fatigue which can leave a quarter of sufferers unable to leave their home. Other symptoms can include localised pain, memory and concentration problems and psychological difficulties.

There are likely to be around 800 people of all ages in the York area with ME, 200 of whom are likely to suffer very severe symptoms.

Exactly what causes ME is unknown, but there are several theories. Some experts think a viral infection such as glandular fever can trigger the condition.

Certain bacteria have also been suggested as a cause in some people, including types of bacteria responsible for pneumonia. Other suggested causes include problems with the immune system, a hormone imbalance and experiencing traumatic events.

The lack of research into the physical causes of ME is why, despite affecting so many people, there is little understanding of it, Bill said.

“If you stood with a tin collecting for an ME charity in Coney Street people would walk past because they don’t understand it.”

Bill’s own condition began nearly ten years ago while he was on a break in the Lake District.

The former marathon runner said he started shivering, shaking and sweating and the next day woke up unable to function.

He felt as though he had been “hit by a train” and felt sore to touch, as if he was bruised all over.

When he returned to work as an office manager he struggled to complete his work.

“People don’t understand it,” he said, “I was at the stage where it was a physical effort to type something with one finger, it was difficult to lift my arm up.”

Now Bill is campaigning to raise awareness of ME and specifically to support people with ME who work or want to return to work.

He is offering his services to go into companies and speak to HR Teams about ME and how they can help colleagues back into the workplace.

Employers could help employees by adapting their work pattern or environment, as people with the condition may have a sensitivity to light, may struggle to concentrate, or hear in a crowd. The condition can affect people very differently, he said.

Tony Britton, a spokesperson for the ME Association, said a substantial number of people with ME are desperate to work.

He said: “ An employee should talk over their problems with HR and attempt to get some concessions at work like doing reduced hours, doing some work at home, maybe cutting down the amount of noise and light in the room they are working in.”

– The York ME Community coffee club meets monthly. The next get together is on Wednesday, November 16, at 2pm at Novotel York. 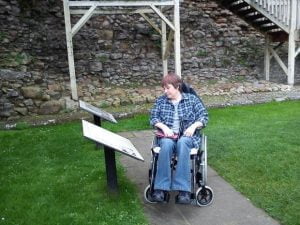 AS with many people affected by ME, Olwen Bentham (pictured above) developed symptoms after suffering from viruses.

Soon after her daughter was born in 1993, the former occupational therapist suffered a string of illnesses and then became very unwell.

Now 53, Olwen, from Market Weighton, is in a cycle of relapses and remissions with her ME, with each relapse making her more unwell.

While she stays positive and is a member of the York ME Community, she says she is always surprised by the widespread lack of understanding of the condition.

“People don’t seem to get it at all,” she said, “They think it’s like having a cold or the flu. They don’t realise you can get to the stage where it’s fatal.

“The public do need to hear from ME folk about the illness, find out just how bad it is, or can get. They only seem to hear the view that it is like a bad cold or flu. The fact that it totally ruins lives , careers, and family life as we knew it doesn’t seem to get heard at all.

“If employers were made more aware of what their ME workers were coping with, then maybe they would be more understanding of the daily struggles people with ME are going through.

“There’s no real research done on it. They will never do the research needed if they don’t accept it’s the real illness it is.”

– 250,000 people in Britain have ME, their sympoms ranging from very mild to very severe. A quarter of these people have very severe ME, and are unable to leave their homes and may be bed-bound

-All types of people at all ages are affected. Severe and debilitating fatigue, painful muscles and joints, disordered sleep, gastric disturbances, poor memory and concentration are commonplace.