From the Newcastle Chronicle, 14 September 2014. Story by John Lowdon. 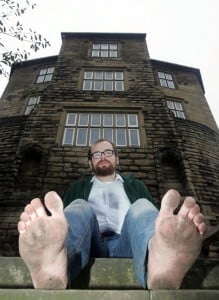 A Newcastle PhD student is raising awareness of a medical syndrome by casting aside his shoes and walking the streets barefoot.

Hungarian student Zoltan Derzsi from Bensham, Gateshead, has decided to go about daily life in Newcastle without his shoes to raise money and awareness of Chronic Fatigue Syndrome, also known as ME.

The condition causes constant tiredness, joint pain and severe headaches. Around 12,000 are thought to face the condition in the North East while 250,000 people suffer from the syndrome in the UK. It is thought that ME is twice as common in women.

Zoltan, who calls himself the Barefoot Scientist, was inspired to start a fundraising campaign after a friend’s daughter was diagnosed with the condition four years ago.

He has looked on as she has struggled with her ME, enduring almost constant immobility and pain. There is no cure.

Zoltan said: “When I saw how helpless medical staff were in treating my friend I decided I had to do something to raise awareness of this terrible disease.”

His unusual idea to go barefoot is an attempt to highlight a particularly nasty symptom of ME. He said some sufferers experience severe sensitivity in their skin, meaning that soft materials can feel hard and uncomfortable to the touch.

He admits that he found the experience painful when he first begun his barefoot journey and that he has already had glass stuck in his foot.

Zoltan, who is in his second year of a PhD in Neuroscience, added: “Something soft for us like pyjamas is like sand paper for them.

“I’m raising awareness this way instead of selling cupcakes or sharing something on Facebook. This is much more personal.”

But he admitted the venture has not been without its fair share of difficulty. He has spotted passersby taking photos of his bare feet, and has been asked to leave some areas because of health and safety.

To make things easier he now wears a jumper with ‘Barefoot for charity’ written on the back and has printed out leaflets to tell inquisitive strangers why he’s stopped wearing shoes.

Zoltan is planning to donate the money he raises to ME North East and ME Research UK and hopes that his effort will raise awareness of the impact ME can have on its sufferers.

To donate go to www.barefootscientist.org.uk