What’s M.E. got to do with it? A heck of a lot – when you’re taking this intellectual equivalent of the great American road trip 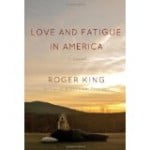 This book makes instant connections with the heart of America but it’s not about someone living the great American dream.

Because the unnamed narrator has M.E., he has to make the best of the ‘small life’ that came calling when least expected – in the company of a heffalump of a dog called Arthur.

British writer Roger King, author of four previous novels who has worked extensively in Africa and Asia and held university posts in international development and creative writing, sends his character to an obscure North-West university where he has been invited – surprise, surprise – to teach creative writing.

Through an undoubted ability to ingratiate himself with women of a certain age who make up most of the faculty, he scams his way in. They like his quiet charm and good manners. He hates the fact that that M.E. is always in the background, sending him to the couch for hours on end when no one else is about.

Then he’s on his own, scrupulously turning up to teach his classes, taking the pay cheque, marvelling at the cute chicks with long, loose limbs, but rarely seeing any other member of staff. He can’t take part in college social life and he daren’t risk the possibility of collapsing in front of them. From the point of view of his colleagues, well they just don’t have a view. He’s become the invisible man.

The occasional friendly neighbour, the waitress in the local diner, his landlady become his only companions and sometimes more.

He moves in with Mary, a paleontologist with secrets of her own, and her daughter. Then there are other women, other sexual opportunities, as he embarks on a mind-numbing but reviving road trip when he’s had enough of the university, and they’ve had enough of him.

The author writes that the book – about someone with such a small life and so limited horizons – could never be about exploring the America of boundless opportunities. Instead, it explores whether the country shows enough compassion towards the teeming masses who can’t be part of the fabled dream.

It discovers that collectively it doesn’t. You’re on your own, buddy! Tough, deal with it.

The book is huge in scope and ambition, characters and locations are acutely observed and and the language is utterly unsentimental. It is a riveting read… really, it is.