Welcome to The ME Show with Gary Burgess

We are delighted to announce that Gary Burgess has recorded a special podcast episode for Severe M.E. Day which was published 8th August 2019. For more information see the schedule below or visit this blog.

Season Two of The ME Show began in January 2019 and ended after a very popular ten episodes. He also recorded an ME Awareness Week Special in May. You can still listen to seasons one and two of the podcast series using the player below, or via a subscription to iTunes or other podcast platforms.

Gary started the last season interviewing Dr Charles Shepherd who provided an update on M.E. research, the NICE guideline review and the important patient surveys that are feeding into that process. There is a note of cautious optimism about the developments taking place in the world of M.E.

We had hoped to bring you a season three of the ME Show in January 2020, but due to illness this has had to be delayed. We will let you know if and when a new season is forthcoming.

‘My illness has shown journalism can be a force for good’ 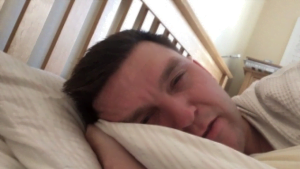 Gary Burgess has become a well-known advocate in the M.E. community after the disease left him unable to continue in his chosen career.

In 2018 he was interviewed by the Jersey Evening Post and appeared several times on ITV News where he worked as a respected reporter.

“Since sharing my story I have been utterly overwhelmed with messages from people I know and people I don’t, from all around the world.”

He also appeared as guest-editor on Radio 5 Live which featured an hour-long phone-in, raising awareness of the issues people with this disease regularly must face.

Most recently, in June 2019, Gary was asked to share his story by ITV Channel Islands News and the resulting video has been viewed over 130,000 times! Gary also produces The Zonked Club – his own series of blogs and articles.

Use the hashtag #TheMEShow to share your feedback and messages.

You can listen to the show right here on our podcast player:

The most recent episode will be shown here automatically.

The ME Show By Gary Burgess on iTunes

Please rate and review to increase the visibility in iTunes’ rankings. You’ll also find The ME Show on Stitcher, Buzzsprout and TuneIn.

Special Episode: Severe ME and Problems with Benefits

Gary Burgess speaks to Jo Moss who has Severe M.E., and to Ann Innes, Welfare Rights Adviser to the ME Association.

Special Episode: ME Awareness The Real ME
To mark ME Awareness Week, Gary Burgess shares stories from Real people with M.E. Hear them describe their own experiences in their own words. A transcript of this show is also now available and will appear as a separate blog very soon.

Season 2 Episode 10 with Dr Mark Guthridge
Gary Burgess speaks to Australian medical researcher Dr Mark Guthridge, who has lived with M.E. since 2015. Mark now devotes much of his time to promoting awareness and understanding of M.E. and is about to begin a new research project which could lead to a diagnostic test

Season 2 Episode 9 Show Notes with Carol Monaghan, MP
Gary Burgess speaks to Carol Monaghan MP, a staunch supporter of people with ME who’s arranged a number of Westminster debates – most recently in January this year.
Gary spoke to her in the week ME was making the headlines after a psychiatrist announced he was stopping his ME research because of bullying, and Rod Liddle wrote a comment piece in the Sunday Times mocking people with ME for believing their illness was “real”.

S2 Episode 8 Show Notes with Dr Nina Muirhead
Gary Burgess speaks to Dr Nina Muirhead who has ME and now campaigns to raise awareness among her medical peers. In this conversation she talks about her own experience of understanding ME as both a medic and a patient, and of her work to ensure the new generation of medical students have a better understanding of the illness.

S2 Episode 7 Show Notes with the Countess of Mar
Gary Burgess speaks to the Countess of Mar, who sits in the House of Lords, and chairs the Forward ME coalition of ME charities. The Countess speaks about her work to unite charities in the face of lobbying from psychological groups as well as the ongoing review of official guidelines for the treatment of ME.

S2 Episode 6 Show Notes with Dr Sarah Myhill
Gary Burgess speaks to Dr Sarah Myhill, a long-time ME campaigner who runs a specialist clinic for people with ME and Chronic Fatigue Syndrome. In this episode she explains, in detail, her understanding and experience of treating people with ME and CFS, as well as her own ongoing battles with the General Medical Council. In this episode she makes allegations about the authors of the Pace trial report, and her fight to get the GMC to look again into those allegations is ongoing.

S2 Episode 5 Show Notes with Sue Pemberton
Gary Burgess speaks to Sue Pemberton, an occupational therapist who runs the Yorkshire Fatigue Clinic. She has a deep understanding of M.E. through many years of working with people from mild to moderate through to severe forms of the illness.

S2 Episode 4 Show Notes with Dr Nigel Speight
This week, Gary Burgess speaks with long-time M.E. advocate and expert, Dr Nigel Speight. He is the paediatric medical adviser to the ME Association and to the 25% Group, and has been working tirelessly to help families affected by M.E. Dr Speight provides crucial medical evidence and knowledge when children are subjected to court proceedings over disputed care and treatment.

S2 Episode 3 Show Notes with Caroline Kingdon
Gary Burgess speaks to Caroline Kingdon from the ME CFS Biobank at the Royal Free Hospital in London. Caroline has worked at biobanks in both the United States and Middle East, and now works closely with ME patients who donate samples which are used by researchers around the world.

S2 Episode 2 Show Notes with Linda Tannenbaum
Gary Burgess speaks to Linda Tannenbaum of the Open Medicine Foundation in the United States which raises millions of dollars annually to fund ME research.

Just click the image opposite or visit our JustGiving page for one-off donations or to establish a regular payment. You can even establish your own fundraising event.

Or why not join the ME Association as a member and be part of our growing community? For a monthly (or annual) subscription you will also receive ME Essential – quite simply the best M.E. magazine!

Visit other pages in this section: