What Triggers ME?
Dr Charles Shepherd, Hon. Medical Adviser to the ME Association, talks about the common factors that are believed to predispose, precipitate and perpetuate ME/CFS, in a short video that was made by ME/CVS Vereniging.

Page Contents
Click the headings below to jump to each section on the page.

At the ME Association, we believe it is high time the world at large realises that this disease can affect anyone – any age, any ethnicity – and can occur at any time of life.

People with M.E. are demonstrating they possess the confidence to be seen and are raising more awareness than ever before! It’s not too late: Join the Real M.E. campaign.

The ME Association Clinical and Research Guide

Free Guide for Health Professionals!
We are pleased to offer a free hard-copy guide to GPs, NHS consultants and other healthcare professionals in the UK. Please contact head office with name(s) and address details, or for more information and for any bulk orders.

Prominent symptoms in one patient may be quite different to those seen in others. Some patients are predominantly affected by mobility problems whereas others find aspects of cognitive dysfunction or pain to be a far more disabling component of their illness.

Symptoms follow a characteristic pattern of variability (often fluctuating throughout the course of a day) and chronicity. Patients will often describe how they experience ‘good days’ and ‘bad days’, with fluctuations in severity being influenced by physical activity, stress, infections and temperature excesses.

Note: Those who have postural dizziness together with a history of loss of consciousness should be assessed, diagnosed and managed according to the NICE syncope guideline (National Institute for Health and Care Excellence 2010) and the European Society of Cardiology guideline (European society of Cardiology 2009). This may involve formal autonomic testing and tilt table testing. Ideally, this should include continuous beat-to-beat heart rate and blood pressure measurement in order to detect subtle blood pressure changes.

Cognitive Dysfunction in ME/CFS
Difficulties with memory and concentration are a common and sometimes a major issue for people with ME/CFS. This download comprises two leaflets; the first leaflet covers practical coping strategies and discusses whether drugs and supplements may help. The second leaflet is designed to explain these difficulties to employers, benefits agencies, etc.

Cold Hands and Feet in ME/CFS
Cold extremities (hands, feet and toes) are a fairly common and sometimes very disabling symptom of ME/CFS. This leaflet explains some of the causes and how the symptoms might be improved.

Fatigue in ME/CFS
This leaflet describes the unique type of fatigue experienced by people with ME/CFS and why it is often used as a key diagnostic tool. You need to know what is meant by fatigue and fatiguability in ME/CFS and the way it differs from the chronic fatigue that occurs in a wide range of other illnesses.

Headaches of a new type, pattern or severity are often reported by people with ME/CFS. Migraine headaches are also reported to be more common. Headaches also form part of the symptom list for most diagnostic criteria. This leaflets examines the possible causes of these headaches as well as considering possible remedies.

Orthostatic Intolerance in ME/CFS
Orthostatic intolerance (OI) is the medical term for problems and symptoms that can occur when people stand up, or try to remain in a standing position for more than a short period of time.

This is something that affects most people with ME/CFS to some degree and many doctors would regard it as a key diagnostic feature. For some people, OI becomes a very disabling part of having this illness.

Pain in ME/CFS
Four in every five people with ME/CFS experience pain. When it occurs, it can do so in many different forms and with varying degrees of severity. This leaflet looks at the general principles of pain management and treatments involving both drug and non-drug approaches. 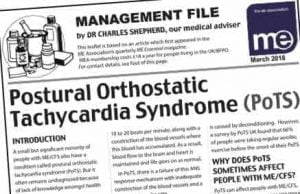 PoTS in ME/CFS
A small but significant minority of people with ME/CFS also have a condition called Postural Orthostatic Tachycardia Syndrome (PoTS). But it often remains undiagnosed because of lack of knowledge amongst health professionals.
This leaflet is based on a Workshop on PoTS where up-to-date guidance on diagnosis and management was presented by Professor Julia Newton and representatives from the charity PoTS UK.

Stomach and Irritable Bowel in ME/CFS
A significant proportion of people with ME/CFS report that they also have stomach and bowel symptoms very similar to those found in irritable bowel syndrome (IBS). This leaflet looks at what may be the cause and how the symptoms can best be managed. Also included is the NICE guideline on IBS and diet.

Other symptoms that are commonly reported and are consistent with a diagnosis of ME/CFS include:

We know how very difficult life can be when you have severe ME/CFS. We understand that even the smallest activity like brushing your hair or having a bath can seem impossible at times.

We appreciate that there are times when you will have trouble talking, remembering or making decisions and how emotional all this can feel for you.

We understand that you are severely limited in what you can say and do and are dependent largely or solely on others to help and care for you.

We know that many people with severe ME/CFS are unable to go out and that some of you are bedridden.

It can be so hard when people cannot gain the understanding they need from their family, friends and, sometimes, from their GP.

As noted in the 2002 Report to the Chief Medical Officer into ME/CFS (section 4.2.1.2), the most severely affected patients, usually a small minority, may experience:

Problems with swallowing may require nutritional support through either tube feeding or through a percutaneous endoscopic gastrostomy. The possibility of coexistent vitamin D deficiency should also be considered.

Research funded by the ME Association into factors that may be involved in the development of severe ME/CFS (Pheby and Saffron 2009) has shown that the type of early illness management appears to be the most important determinant of severity.

Having a mother with ME/CFS was also important – possibly related to mitochondrial inheritance. Pre-morbid personality was not a risk factor, and neurotic traits were more frequent among the less severely ill. Conscientiousness overall was not related to severity.

A recent study (Pendergrast et al 2016), from a research group at Newcastle University, reported that people with ME/CFS who are housebound are significantly more impaired in relation to physical functioning, bodily pain, vitality, social functioning, fatigue, post-exertional malaise, sleep, pain and neurocognitive, autonomic, neuroendocrine (hormonal) and immune system functioning than people with ME/CFS who are not housebound. 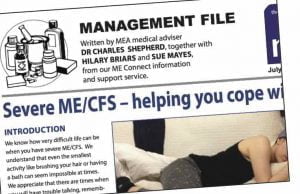 In this 12-page leaflet, we discuss severe ME/CFS – symptoms, management, care, – and how the illness can be explained to family and carers. We also consider the medical and social help you may be able to obtain.

It contains a two-page checklist that you can pass on to the people responsible for your care, and severe ME sufferer, Hannah Radenkova, describes what it’s like being on the receiving end of the stigma that is so often attached to this disease.

You might also be interested to read a blog we created for Severe ME Day that also listed all the resources we have available and which might be appropriate.

Most medical reviews of ME/CFS state that there are no significant physical examination findings in this illness. This is then interpreted to be consistent with the erroneous view that ME/CFS is a psychosomatic condition.

The diagnosis of ME/CFS should essentially be made on the typical pattern of symptoms with the exclusion of other possible conditions that can present with fatigue and general ill-health.

Anyone suspected of having ME/CFS should have the following routine investigations:

At present there is no diagnostic blood test for ME/CFS – but testing your blood is essential to rule out other illnesses that can cause similar symptoms.
This leaflet explains why no diagnostic test is currently available and why exclusionary blood tests are so important.

Please refer to the clinical and research guide for a more detailed explanation of baseline investigations and other tests that may be required.

There are several scoring questionnaires, charts and diagrams that may be helpful in the assessment of fatigue and pain, for example:

Research into exercise physiology in ME/ CFS carried out by Snell et al (2013) and VanNess et al (2003) and replicated by Keller et al (2014) indicates that a two-day cardiopulmonary exercise test (CPET) protocol can objectively document post-exertional malaise in ME/CFS and could be used as a diagnostic biomarker.

Mandatory features of the protocol involve:

This type of testing reveals a statistically significant performance decrease on day 2 (i.e. the second test) in:

In support of the ME Association’s position on GET (that it should be withdrawn from the current NICE guideline), we include a copy of the 2018 letter from Professor Mark VanNess and the Workwell Foundation research group in America with every free copy of our clinical and research guide sent to health professionals.

A disability assessment scale can be useful for following progress and providing information for benefit, employment and insurance assessments.

ME/CFS can have a significant impact on daily living.

Just click the image opposite or visit our JustGiving page for one-off donations or to establish a regular payment. You can even establish your own fundraising event.

Or why not join the ME Association as a member and be part of our growing community? For a monthly (or annual) subscription you will also receive ME Essential – quite simply the best M.E. magazine!

Visit other pages in this section:

^ Return to top of page