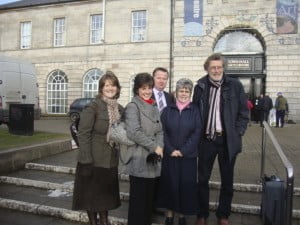 The hugely successful Newtownards and District Charity Committee  – which has distributed £181,000 to charities which serve Northern Ireland since it was founded in 1982 – has pulled a lovely Christmas cracker for the ME Association.

ME Association medical adviser, Dr Charles Shepherd, visited the Saturday market outside Newtownards Town Hall on Saturday, December 11, where he received a £2,000 cheque from members of the committee. The money was raised from a concert attended by 200 people in the Great Hall at Stormont in September and other charity events during the year.

We were nominated for a share of this year’s fundraising proceeds by Karen Boville, who had to give up working five years ago after she was diagnosed with ME. “I wanted to do something for a charity which helped me, particularly when I first became ill”, said Karen, who has had to put plans for a promising career in accountancy on hold while she gets better. 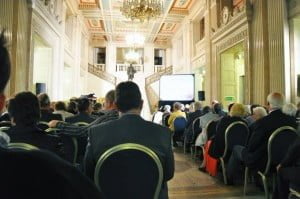 The other scene is from the Stormont concert.