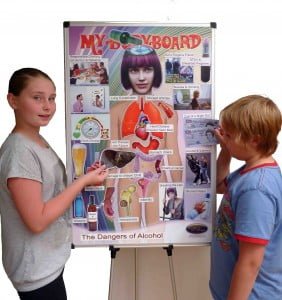 From the Blackpool Gazette, 9 November 2010

HAVING to give up work  because of ME was a frustrating turn of events for Anji Wright.

But now the 41-year-old is turning things around to begin a new business venture with her husband Paul, which has started to take off.

The couple, from Thornton, have designed and produced interactive education aids to be used to teach youngsters about the human body.

My BodyBoards are interactive boards which can be stood up in front of classes and uses magnetic pictures and text descriptions to allow classes to make a display about the dangers of alcohol or smoking.

Anji’s background and skills in graphic design allowed her to develop the concept and design – despite being unable to get out of bed some days due to her ME, or chronic fatigue syndrome.

She had been working at Blackpool Victoria Hospital for five years in secretarial roles, but began feeling more unwell from December last year.

She said: “It felt like I had flu, but I never recovered or got better. I never really got my energy back.”

Anji had to stop working in May and was diagnosed as having ME – leaving her feeling constantly exhausted.

She said: “It’s frustrating. Some days you can’t even lift your head up off your pillow, that’s how little energy you have. It feels similar to when I had pneumonia many years ago, but not getting better.

“It was really good I discovered something I could actually do.

“I can work from home, use the laptop and use my graphic design skills for the bodyboards. I can only manage about two hours spread across the day, maybe three hours on a good day.

“I was running my own cake-making business before this happened and they will always be my first love. But with the chronic fatigue syndrome, it’s too physically demanding at the moment.”

Paul, 35, said: “It’s really quite an accomplishment, given the fact doctors have recently noted Anji has, on any given day, an energy level of 30 per cent her normal amount.”

The idea for the My BodyBoards came from similar products the couple had seen used, but felt they were two-dimensional and wanted to create something hands-on.

Anji said: “We wanted to create something which could stand up in front of a class of children and could be fun and interactive and start discussions.

“And something you could stick organs on, so we used magnets. Then we just tried to come up with the right colour combination and so on.”

With Paul’s background as a primary school teacher and a public health specialist in the North West, the couple decided they wanted to use the interactive boards to educate about the dangers of smoking and alcohol and illustrate the damage both can do to parts of the body.

They launched the product a month ago, and already have a deal with two education resource companies which will be putting the product in their next catalogue.

They recently delivered their first set of orders to Trafford and Manchester and are currently in discussions with Blackpool Council about the possibility of the product being used in local schools.

The couple, who are guardians to their four-year-old nephew Bailey, hope the next My BodyBoard they develop will involve relationships, sexual health and puberty.

Our photo shows Danielle Warburton and Ronan McDonnell with one of Angi’s ‘Bodyboards’. Ronan is holding two £20 notes – the cost, roughly, of smoking 20 cigarettes a day for a week. The unit comes with a teacher’s lesson plan – showing how to construct lessons for children as well as adults.