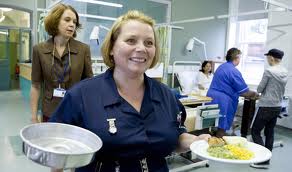 Joanna Scanlan has emerged as one of television’s queens of deadpan humour — although in her case perhaps that should be bedpan. The actress, who first made us wince with laughter as the inept career civil servant Terri in The Thick of It, returns to our screens tonight in a new series of the equally discomfiting — and hilarious — hospital comedy Getting On.

The show’s pitch-perfect take on life on the urine-and-red-tape-soaked front line of the NHS owes much to the fact that the subject matter resonates so loudly for Scanlan’s co-stars — and close friends — Jo Brand and Vicki Pepperdine with whom she writes the series. Brand was once a psychiatric nurse, while both Pepperdine’s parents worked in the NHS.

It turns out that Scanlan’s experience is even more personal, and, more profound. Without the extraordinary intervention of an NHS doctor several years ago she might never have emerged on our screens at all. “Yes, I suppose the role of the NHS in my health and happiness is quite significant,” she says, the stonewall delivery, for once, laced with an ironic smile.

Scanlan, from Denbigh, in north Wales, knew she wanted to perform “from the age of four” and, at Cambridge University, trod the boards as a member of the Footlights. She assumed she would walk into the acting profession like her contemporaries Tilda Swinton and Simon Russell-Beale. “I applied for jobs and agents but nothing happened,” she says. “It completely fazed me, I didn’t understand it. I didn’t know what was happening.”

When she was offered a job teaching drama at Leicester Polytechnic in her mid-twenties, she accepted what seemed like the inevitable.

“I’d given up the dream really.”

Things soon got even worse.

She found herself coping with a bureaucratic nightmare as the polytechnic was transformed into De Montfort University. “I was in my late twenties and I was given the job of trying to make this transition process work, which wasn’t easy at all. I felt that I was going to be letting the students down,” she explains. “I was over promoted.” In the end she collapsed under the strain of it all. “I became very ill. I had 12 months off from the job. For 18 months or so I was going back and forth to the hospital every week as they tried to work out what was wrong with me. It was eventually diagnosed as ME, or chronic fatigue syndrome. Looking back now it’s obvious that the illness was stress related.” For a period, she admits, she was unsure whether she would ever recover. It was then that she encountered a consultant physician at the Ysbyty Gwynedd hospital who offered her some career advice.

“In fact what he said was: ‘If you don’t go back to acting you will be ill for the rest of your life’.”

“It was a complete life-changing turn. It was a total thunderbolt. I thought to myself unfortunately what this man has just said is correct,” she says. “The reason it was unfortunate was that it meant I was going to have to face up to a lot of things. I was going to have to disappoint the people I worked with by leaving my job. I was also 30 at that point. It seemed thoroughly embarrassing, I should have grown out of those childish things.”

To get into the industry, she began writing drama for television, scripting children’s shows like Byker Grove. Then, at the age of 34, she summoned up the courage to make another attempt to break into acting. “I rang up an agent and asked them whether they’d take me on. They agreed,” she says. Her first appearance was as a midwife in Peak Practice. The breakthrough came first when she got a plum role alongside Scarlett Johansson in Girl with a Pearl Earring and then got cast as the bumbling Whitehall Press Officer Terri Coverley in Armando Ianucci’s The Thick of It. When that took off, spawning three series and a movie spin-off, In The Loop, new doors opened for her.

With south London neighbours and friends, Brand and Pepperdine, Scanlan came up with the idea of a comedy set in a general ward at an NHS hospital. The story revolves around a nurse, Kim Wilde, played by Brand, Sister Den Flixter, played by Scanlan, and Dr Moore, played by Pepperdine. “Each of them is trapped. Kim doesn’t want to spend her life wiping fat people’s bottoms. Den still harbours a very immature teenage romantic dream that one day her prince will come.

And Dr Moore still hopes to move to a teaching hospital. Meanwhile they have to get on and treat the patients as best they can,” Scanlan explains.

Peter Capaldi agreed to direct it and three episodes were commissioned.

It became an immediate hit, winning critical acclaim — and even a Bafta nomination — despite arriving on screen with little fanfare on BBC Four. It succeeded for several reasons, not least a script studded with dark, droll dialogue and winning one liners. It also has warmth, humanity and a political point to make about the bureaucracy that afflicts the NHS — something Scanlan understands well. “My time at a University gave me a perspective on bureaucracy. This idea that you are encouraged to see people as units.”

Of course, the other quality the series has benefited from is its extreme timeliness. If the first series seemed prescient, the second series’ connection to the zeitgeist is even stronger. In a climate of cutbacks and ward closures, Dr Moore, in particular, fears the axe. “It does seem really prescient, even though we wrote the first series 12 months ago, before the coalition. We did a lot of research and a lot of people we spoke to could see this coming down the road,” Scanlan says.

Getting On’s writing, improvised filming and editing process owes much to the techniques Scanlan and Capaldi learnt working with Armando Ianucci. “He taught me a huge amount, I owe him a huge debt,” she says. If pushed, however, one suspects her greatest debt of gratitude may have to be paid elsewhere — to the un-named NHS doctor who diagnosed her need to share her gift for bedpan humour with the world. “The truth is I don’t know what would have happened if he hadn’t said that to me,” she says . . .