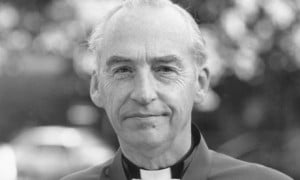 The Very Reverend Michael Mayne is my hero – as writer, priest, thinker, preacher, teacher, a man of many parts, all beautifully played. That phrase is apposite, given that he once thought of becoming an actor. He loved the theatre and understood its plays and its people intuitively. But the Church of England would have lost a great priest. Michael was vicar of St Mary’s, Cambridge and, later, one of the great deans of Westminster. He made the abbey a place for people and their needs, not just a historical tourist destination.

His understanding of illness came through grievous personal experience. He had ME for several years and it nearly broke him, but out of it came a defining book, A Year Lost and Found, and then his presidency of the ME Association. Michael always practised as well as preached. He worked tirelessly for years for the Medical Foundation for the Victims of Torture, and with Dame Cicely Saunders in the hospice movement. But he always had time for people and their problems and he never spared himself, probably to the detriment of his own health.

His books about literature, especially poetry, art, God, the Anglican church, human life, pain, joy, the natural world, all interlinked in a great dance, are always beside my bed, and his insights into the work of George Herbert explain him and his work as few others have done.

Michael died four years ago, bravely, painfully of a facial cancer, enduring surgery and radiotherapy, and he wrote about this too in his inspiring last book, The Enduring Melody. We also had a close, private and personal link. I respected, admired, learned from and loved Michael Mayne and I miss him. But I have a sense of his continuing guidance and concern which re-assures and strengthens me every day.